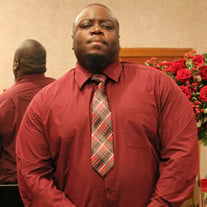 Celebration of life of Antoine La-Morris Workman AKA Big Daddy, Steez, Tweez, Chocolate Thunder, Gentle Giant, Teddy Bear On December 14, 1979 Cynthia Irene Workman gave birth at St. Vincent Hospital N.Y.N.Y to a bouncing baby boy and at 11 days old he was delivered to the Late Ivy Evans This is when Antoine Family Journey began. When Antione was learning to walk he was very adventurous and love to eat. Antoine favorite sport was his big wheel. Every Christmas he will upgrade to a new big wheel and if you did not see Antoine he would sneak in the house and explore what he can get into. His adventure started his toddler years One day Cynthia was looking all over for Antoine and when she open the door Antoine was down the stairs in his walker legs dangling and he thought it was so funny. One of his favorite was getting his head stuck in the staircase he would yell HELP ,HELP just to see how long it would take Uncle Eugene to rescue him .He would say that did not hurt and will go do it again. Antoine earned a lot of stripes and metals from this bumps on his head, knots and his famous black eyes and the funny part he will go back and do it again. Antoine was baptize at Berean Missionary Baptist Church in Brooklyn where he was a member of the J.r Usher Board he also served as a Boy Scout Antoine attended P.S.7 and I.S.171 and later went to Franklin K. Lane H.S. where he obtained his High School diploma. While attending H.S Antoine as you know Big Daddy met Cindy Antione and Cindy welcomed their beautiful daughter Antanice .What mattered the most Antoine loved his family although Cindy and Antoine went their separate ways they remain friends and co-parent until the end .Antoine had Antanice every other weekend and never missed a weekend. Antoine specialty was cooking and baking Italian dishes and wingetts Antoine worked at CBA Industries in Brooklyn where he served 14 years and that’s where he met the love of his life Yaquelyn . Antoine and Yaquelyn welcomed their handsome son Moses. What we loved about Antoine he was family oriented. We would have Family Fridays and he would always have a surprise .One night he presented the three ladies in his life with trophies his ma mommy and auntie such a special night he even wrote a speech Antoine had many nicknames his auntie Jo Jo gave him the name Big Daddy followed by his cousins given him Tweeze, Steez and let’s not forget Chocolate Thunder. Raven even had a better name Bob the Builder. Antoine will come over ready to work. It did not matter what repairs needed to be done he needed the drill and the power saw. Just a couple of months ago Antoine was the plumber Antoine project was to put up the bathroom sink we have the sink and cabinet put up but don’t have running water and guess what we still don’t’ have none. Antoine will flood the house , Antoine will use his measuring tape but the steps will always come out crooked We always praised and laugh at the job Antoine did .Antione always make sure everything is fix in the house. He will always be our Bob the Builder. Antoine last adventure was his family vacation in August Shaquana’s Birthday road trip .Antoine said’ We will always go on a road trip every year.’ On September 16, 2021 our precious Soldier Antoine La Morris Workman contracted the deadly battle and enemy that took his life at the age of 41 Covid 19 and pneumonia. Antoine was admitted to NYU Langhorne Hospital ICU unit for three weeks where he fought with all his strength, courage, power, prayer, and energy. The battle continued and our soldier continued to fight. As the last days approached Antoine with all his strength was able to tell his family all his wishes and that day Antoine married Yaquelyn’s heart and Yaquelyn married Antoine’s heart. Antoine wishes will be followed as we now have Antanice and Moses. God whispered to Antoine your work is done we may have lost the battle however we won the war where you going you are able to breathe again smell the flowers and the best part no more pain. Antoine leaves behind his mother Cynthia Irene Workman, daughter Antanice Workman son Moses Workman, the love of his life for 15 years Yaquelyn Gill, Aunties Diana Evans Henry, Maude Henry (Bahamas), Joanne Sankar (Trinidad W.I) Debra Ann Evans (California) and Arlene Davis, Uncles Jerry Patterson J.R. (S.C.) Isaiah Patterson (Phila) Michael Patterson )Eddie Workman (S.C.) Alvin Thomas (N.C) ,Eugene Evans J,R (N.Y) Lawrence West (N.Y) Antoine’s Godson Isaiah leon ,Antoine closet cousins Shaquana Evans (N.J) ,Richard Allen 1 (N.Y) Raven Henry(N.Y.),Fannette Brown Griffin (Maryland). And his dearest friends from his childhood Jimmy and Troy and a host of family, friends and his co-workers he work with for many years.

The family of Mr. Antoine La-Morris Workman created this Life Tributes page to make it easy to share your memories.

Celebration of life of Antoine La-Morris Workman
AKA Big Daddy,...

Send flowers to the Workman family.