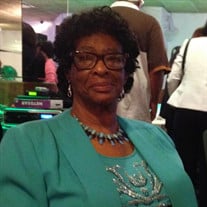 OBITUARY FOR BEATRICE WILLIAMS Beatrice Williams (aka Bea) was born April 2, 1935, in Liverpool (Macon County) Alabama to the late Ike Williams and Ollie Martin. Bea is the 3rd child of the ten siblings. She was educated at Tuskegee Institute High School. Upon graduation, she relocated to Long Island, New York as a Live-In Caretaker. After several years she moved to Brooklyn and became a member of the Janitorial staff at Wickersham Hospital in New York City. In September 1986, Bea was appointed full time minister of Jehovah's Witnesses in the Flatlands Congregation. In 1996 she retired from Wickersham Hospital and continued her ministry as a Regular Pioneer. Bea zealously pursued her ministry until the fall of 2021when her health declined and she was confined to Atrium Nursing and Rehab Center. Our visits were concluded by her telling me, "Get home safe and remember Jehovah God and his son Jesus Christ". Beatrice was a loving and caring sibling, aunt, cousin, friend and Christian sister. She loved socializing with family and friends. Bea was very generous and always ready to share her material valuables as well her verbal knowledge and opinions. She loved live entertainment (music and dancing), watching nature shows and basketball games, playing cards, going out to restaurants and traveling, Cruising was her favorite way to travel and vacation. Beatrice is survived by a niece Yvonne Sanford-Jones, a nephew Dexter Reuben Brown, a grand-nephew Zachary Jones, who were the overseers of her primary care; three sisters Paralee Brown, Olliemae Pogue (Walter), and Johnnie Mae Fisher; three brothers Edward Rogers, Johnny Lee Rogers, and Freddie Lee Rogers (Mary); many nieces, nephews, cousins, friends, and the loving brothers and sisters of the Flatlands Congregation. Beatrice was predeceased in death by her son Calvin Williams; two sisters Louvenia Houston and Helen Sullins; and one brother John Tee Williams.

OBITUARY FOR BEATRICE WILLIAMS Beatrice Williams (aka Bea) was born April 2, 1935, in Liverpool (Macon County) Alabama to the late Ike Williams and Ollie Martin. Bea is the 3rd child of the ten siblings. She was educated at Tuskegee Institute... View Obituary & Service Information

The family of Beatrice Williams created this Life Tributes page to make it easy to share your memories.

OBITUARY FOR BEATRICE WILLIAMS
Beatrice Williams (aka Bea) was...

Send flowers to the Williams family.