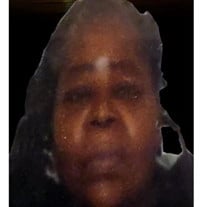 Daisy Pinkney was born January 27th, 1949 in Sumter, South Carolina to Mary & Harmon Pinkney Sr. (both deceased). She grew up from an early age in Gowanas Projects of Brooklyn, New York and met her future husband David Johnson (deceased) there before moving to Bushwick in 66/67. Their union produced 5 children. They both wanted a big family because they came from big families. She did social work before becoming a full-time homemaker to take care of her ailing mother and the family. She was always taking care of somebody. She continued this until ultimately her health started to slowly deteriorate. Daisy spent most of the time talking to her sister Priscilla, and YES, they can TALK! She also loved painting, drawing and collecting coupons to go shopping. Her favorite past time was giving orders. She loved to watch movies and TV shows, and if you didn't like Law & Order, you already know the channel ain't changing, unless it was the grandbaby SugaBear. Even when she found out she was permanently disabled, she loved cruising the highway looking at how different areas and places changed over the years. She was always about FAMILY. Family was the one thing she was always talking about. Daisy is preceded in death by Mary and Harmon Pinkney Sr. (Mother and Father), Harmon Pinkney Jr. (Brother), Robin Pinkney (Sister), Shameeka Pinkney-Johnson (Daughter), Shannon Pinkney-Johnson (Son), and Lt. David Johnson (Husband). Daisy also leaves behind four brothers, Alfonso, Arthur, Joseph, and Victor (Bashir), two sisters, Shirley and Priscilla, three sons, Jonah, Michael and Jermaine, and a host of nieces, nephews, grandchildren, great-grandchildren, family and friends.

The family of Mrs. Daisy Pinkney created this Life Tributes page to make it easy to share your memories.

Send flowers to the Pinkney family.