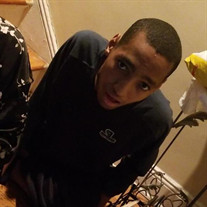 A Life Cut Short to Soon… Davon Christopher Brown, 24 was born on March 4. 1994 second child of Crystal Brown. Suddenly departed this life on October 12, 2018 on the wings of an angel. Davon was autistic, he attended the Birch and William O'Connor School for early intervention. He entered the District 75 program where he attended P4 and the Connie Lekas School 811K where he graduated with his High School Diploma. After graduation he attended Elmy's Special Services until his departure from this life. Davon could be a handful and needed others to help him with his daily life living skills. However, he liked his alone time, he had a love for music and watching television, but most of all he loved to eat (too many dishes to mention but mom and grandma had it covered). We as a family loved him and tried to protect and nurture him to the best of our human ability. Davon was proceeded in death by his Uncle Ronald Brown Jr. (Big Ron), Uncles Barry Smith, Franklin Smith, and Great Grandfather Gordon Smith. Davon is survived by his loving mother Crystal Brown, sister Alexandria Angueria (Robert) and niece Adrianna, Grandmother Gloria Smith (Richard), Grandfather Ronald Brown Sr. (Katie), Great Grandmother Mary Smith, Aunt Danielle Williams (Anthony), Aunt Tenisha, Aunt Felicia (Michael), Aunt Tiffany, Uncle Shaun, Uncle Jamal, Uncle Linwood (Theresa), Aunt Barbara and Uncle Matthew. Cousins Ronald (Levona), DaShawn, Jaloni, Ki`ya, Jeremiah, Julian, and Janiya, Ava, Kristen, Monte, Soriyah, and a host of family and friends. Many thanks to District 75, and the Connie Lekas School 811K family. Special thanks to Haydee Cordero and Claude Plaulin who help make his life rich with teaching and unconditional love. To his Health Aide Queen, thank you for being a great aide, you were there when it made a difference. The Family No evil shall befall you, nor shall any plague come near your dwelling; For He shall give His angels charge over you, To keep you in all your ways; in their hands they shall bear up! PSALM 91: 10 - 11

A Life Cut Short to Soon&#8230; Davon Christopher Brown, 24 was born on March 4. 1994 second child of Crystal Brown. Suddenly departed this life on October 12, 2018 on the wings of an angel. Davon was autistic, he attended the Birch and... View Obituary & Service Information

The family of Davon Christopher Brown created this Life Tributes page to make it easy to share your memories.

A Life Cut Short to Soon…

Send flowers to the Brown family.