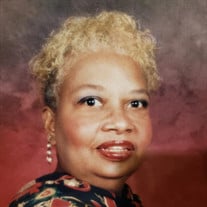 Desatura Louise Newell was born on June 24th 1937 to Clinton Carvin and Myrtle Grace Beatrice Blewett in Rockford Illinois. She carried her father's last name. She was raised by her grandmother and Aunt, Carrie Dee and Inez Blewett respectively in a loving and strict home. She was the oldest of two, surviving a younger brother Clinton Carvin Jr. Upon graduating Auburn Senior High School in Rockford, IL. at the age of 18 Desatura, known as Dee to many, moved to New York to be with her mother. It was there in New York when she met and married Arthur Lee Newell, and went on to raise daughter Inez Marcella Newell and two sons Arthur Lee Newell Jr. and Rodney Lorenzo Newell. In 1969 they divorced but remained good friends and raised their children together. Desatura worked for the United States Post office where she had a long and distinguished career as a postal clerk for nearly 36 years. The bulk of her time there was working at the 11207 station located on the corner of Pennsylvania and Atlantic avenues in Brooklyn. Dee was well respected and admired by her co-workers and developed lifelong friendships with women like Brenda Jernigan-Hodges & Michelle Love, just to mention a few. She retired in 2001. Desatura is survived by her three aforementioned children, eight grandchildren: Kisha Randall, Marvin Randall, Alan Randall, Tanisia Trotter, Tiffany Mazzone, Arthur Newell III, Rodney Newell II and Malcolm Newell, eight great grandchildren: Nasean Cummins, Elizabeth Randall, Michael Randall, Sandra Randall, Nilan Tabb, Alana Randall, Xavier Newell and Milana Trotter. In addition she will be missed by her daughter-in-law Marie Newell, as well as a host of other in-laws and her lifelong friend Millie Bruce. On February 10th 2019 at 4:55 p.m. Desatura died of natural causes in Brookdale hospital with her sons by her side. Desatura was a Christian god-fearing woman who had a heart of gold, was generous, kind and caring but didn't take no mess. She enjoyed traveling, cooking, playing cards, music (blues & R&B) and slot machines. We believe Dee will rise again on that great Resurrection morning. Let us be faithful that we might be reunited with her in the kingdom of God.

Desatura Louise Newell was born on June 24th 1937 to Clinton Carvin and Myrtle Grace Beatrice Blewett in Rockford Illinois. She carried her father's last name. She was raised by her grandmother and Aunt, Carrie Dee and Inez Blewett respectively... View Obituary & Service Information

The family of Desatura Louise Newell created this Life Tributes page to make it easy to share your memories.

Send flowers to the Newell family.