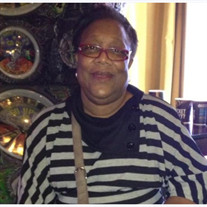 Dorothy Louise Switzer was born on September 12, 1944 and was called home by her Heavenly Father on April 4, 2019. The one and only child born to Mary Gettys and Jack Gettys, Dorothy, who was lovingly known as Dot, was born in Columbia, South Carolina. She relocated to New York as a young girl and established a life for herself in our hometown, Brooklyn, New York. Dorothy grew up with her mom and stepfather Mr. Campbell, who she truly looked up to as her dad. She successfully completed her schooling and shortly thereafter, was blessed with three angels, Victoria, Darlene, and Mary Yvette. Dorothy later met the man that would become her husband, Melvin Switzer, and they were joined in Holy matrimony on December 28, 1979. Through this union, Dorothy gained three more angels, two daughters through marriage, Pamela and Sandy, whom she accepted and loved as her own, and one last little angel, Latesha. Dorothy went on to become a certified home health aide and immersed her heart into that job just as she did with anything else. Everything she did, she did with love and strength, including dealing with the passing of her oldest daughter Victoria in August of 1998. Even through her grief, Dorothy remained a pillar of strength for the family and a shining example for her remaining children, her grandchildren, and her great-grandchildren. Even when her health began to decline, and she began to deal with a host of different illnesses, her courage, strength and love never wavered. Dorothy fought until her heart could take no more, and the Lord decided it was time for her to come home. To carry on her wonderful legacy, Dorothy leaves her husband Melvin Switzer; her daughters Darlene, Yvette, Latesha, Sandy, and Pamela; grandchildren, Joidasia, Denesia, Jair, Keon, Nastasia, Yashiah, Malcolm, Sultan, Shapreece, Tyheem, Deonte, Derrick, Regla, Christian, Dillyn, Tiffany, Nicole, Hector Jr., Stardasia, and Brianna; as well as a host of great-grandchildren, other family members and friends.

Dorothy Louise Switzer was born on September 12, 1944 and was called home by her Heavenly Father on April 4, 2019. The one and only child born to Mary Gettys and Jack Gettys, Dorothy, who was lovingly known as Dot, was born in Columbia, South... View Obituary & Service Information

The family of Mrs. Dorothy Louise Switzer created this Life Tributes page to make it easy to share your memories.

Send flowers to the Switzer family.