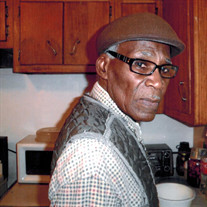 Errol Neblett, 93 of Barbados went home on May 7th, 2018 Errol Neblett was born in the Island of Barbados which is located in the West Indies in the year 1925. He was born to Eva and Conrad Neblett and was the eldest of their four (4) children. As a young man, Errol learnt the trade of mechanics and he worked in the sugarcane factories in Barbados. As an ambitious young man, who wanted to explore the world and to make a better life for himself, Errol migrated to England to engage in better employment opportunities. After a few years working in England and after missing the sunshine in Barbados, Errol returned to his homeland and continued his trade in mechanics. On his return to Barbados he met his wife Elma Lewis and together they shared a daughter, Felicia Neblett. In the 1970’s Errol migrated to the USA with his wife and daughter. He was employed by Con Edison and worked there until he retired. After his retirement, Errol kept himself active by doing many chores around the house and by gardening. If you knew Errol, there was not a day that you would not see him around the house cleaning, painting or looking for something to tinker and fix. He was an avid reader not only of newspapers, but he loved history books. He was an historian in his own right not only of American history, but also Barbadian and English history. Well into his 90’s, he could recall names of historical figures and dates of historical events. He stayed current by reading Barbados Nation and reading the daily paper every morning. He developed his spirituality by attending church. He was a parishioner of his family church at St. Barnabas Episcopal Church. He leaves to mourn his two daughters Felicia Neblett and Myrtle Yearwood, grandson Damian Yearwood, his niece Kelly Payne, and cousin Hazel Augustine. Friends Tashawna and Lescord Ferguson, Miriam Sherrier, Ruby Griffith and the Mignott family. The family wishes to extend their gratitude to the Brookdale Hospital for all their support in his final days.

Errol Neblett, 93 of Barbados went home on May 7th, 2018 Errol Neblett was born in the Island of Barbados which is located in the West Indies in the year 1925. He was born to Eva and Conrad Neblett and was the eldest of their four (4) children. As... View Obituary & Service Information

The family of Mr. Errol Vernon Neblett created this Life Tributes page to make it easy to share your memories.

Send flowers to the Neblett family.