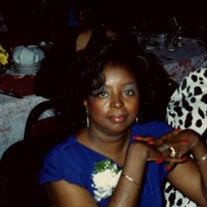 On April 21, 1946, Evelyn Wilder McGee was born to Johnetta Wilder and Elton Holly. Her life is a testament of her faith and perseverance. Anyone who came in contact with Evelyn was greeted with a friendly and loving personality; she has left a mark on the hearts of many. She was always engaging in conversations, about her experiences and offering advice, even if you did not ask for any.Evelyn enjoyed sharing entertaining stories growing up as a little girl in her hometownand always stressed the importance of education to everyone; “education is the only way out of poverty”. Evelyn graduated from Bushwick High School and shortly united inmarriage with Franklin McGee. This union produced three children. She was a dedicated mother, grandmother, sister, family member and friend. If you needed help she would always be there to offer her support. She was sociable and enjoyed music, traveling and spending time with family and friends. She possessed a great sense of humor and at times could be very outspoken.In her early years her career path was filled with many journeys. She was a bookkeeperand a successful sales representative at Seaman's Furniture Company for many years. Retiring in 2011, Evelyn had a wonderful career with the New York City Transit Authority. Starting out as conductor, promoted to tower operator and ending her career as an assistant dispatcher. During her career she formed long lasting friendships with colleagues that bloomed into extended families. Leaving to cherish her memory are her children; Franklin McGee Jr., David McGee, and Francellia McGee. She is also survived by five grandchildren, one goddaughter and four siblings; grandchildren: David McGee Jr., Naomi Jhonetta McGee, Nevaeh Lynn McGee- Cassius, Devon McGee, Nataya McGee, goddaughter: Lauren Stephenson and siblings: Caroline Wilder, Patsy Wilder,Thomas Wilder and Bobby Wilder and a host of nephews, nieces, cousins and special family friends. Preceding her in death are her siblings; Oscar Wilder, George Wilder, Shirley Wilder Bembry, Larry Wilder and Henry Wilder. She was loved very much and will be truly missed….

On April 21, 1946, Evelyn Wilder McGee was born to Johnetta Wilder and Elton Holly. Her life is a testament of her faith and perseverance. Anyone who came in contact with Evelyn was greeted with a friendly and loving personality; she has left... View Obituary & Service Information

The family of Mrs. Evelyn McGee created this Life Tributes page to make it easy to share your memories.

Send flowers to the McGee family.