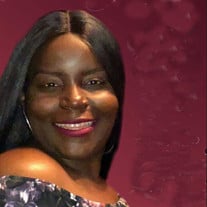 Kerone Nickesha Dixon, known as Kerr to family and friends was born on May 21, 1980 and passed away peacefully at home on February 6th, 2019. She was surrounded by the love of her immediate family and a few friends. She left us peacefully with a smile on her face. In the early years of Kerr’s life she lived in Jamaica with her great grandmother whom she adored. She also lived with her father, Lincoln Dixon for a period of time. She disliked the idea of being away from her mom and longed for an opportunity to come to the United States to live with her. The relationship they had was more than a mother/daughter relationship. They were each other's best friend and confidant. Kerone graduated from Marymount High School in 1997 and migrated to America to further her education at Long Island University. In 2003 she graduated with her BSN and started her first job at the Hospital for Special Surgery. She then moved on to Methodist Hospital where she began work as a Labor and Delivery Nurse. In 2000, she met the father of her children Caruth Aris. On July 19, 2004, her daughter, Abigail Aris was born. Just like everyone’s first child, Kerr did everything in her power to ensure her Abigail was loved beyond compare. On December 7, 2010, she welcomed her second daughter, Amaya Aris. Upon the birth of Amaya’s arrival, she stated “I looked into Amaya’s eyes and I felt like Amaya could understand everything that I was saying to her and the connection was indescribable.” In 2014, Kerr was diagnosed with breast cancer. Although she was stressed and worried about her health, she still held faith and constantly quoted her favorite saying “by the grace of God.” Later that same year she had a double mastectomy and we thought it was over. As she began to get better, regain strength, and confidence to go back to work, more bad news was received. Following the surgery the cancer metastasis to her liver. She continued to fight and her faith immensely grew. She continued her growth in faith at St. Paul Community Baptist Church, as her faith in Christ grew she made a commitment to God and was baptized on December 31, 2015. Kerr continued fighting and praying every day for the strength and wellness. The Kerr we knew was a beautiful, humble, devoted and loving mother to her children, family, and friends. She was caring, sensitive, giving, loving daughter, sister, niece, cousin, and friend. She is survived by her two lovely daughters, her supportive and loving mother, her father, her sisters, Raquel, Mediore, Juday, and her brothers, Cliffan, Lincoln Jr., Juvhan, Denver, Sekue, Jamar, Lincoy, Tavoun, and L-Jay. We all will remember her legacy and how she touched all of our lives. Remembering Kerone as the one that loved to dance, listen to music, cook, spend time with family, and an overall happy, beautiful, and kindred soul.

Kerone Nickesha Dixon, known as Kerr to family and friends was born on May 21, 1980 and passed away peacefully at home on February 6th, 2019. She was surrounded by the love of her immediate family and a few friends. She left us peacefully with... View Obituary & Service Information

The family of Ms. Kerone Dixon created this Life Tributes page to make it easy to share your memories.

Kerone Nickesha Dixon, known as Kerr to family and friends was...

Send flowers to the Dixon family.