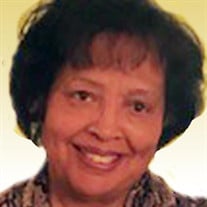 Lorraine Bettis Hunter Black born to the late Henry and Ella Bettis on March 4, 1941, in Brooklyn, New York. She departed this life April 18, 2022, peacefully in the comforts of her home in Tucson, Arizona. Lorraine was born and raised in Brooklyn, New York in a loving home with her 3 siblings Henry Bettis Jr. (Junnie), Donald Bettis and Bernice Bettis Dyer (Bunny). From a young age of about 6 she had a love and interest to design clothes, this led her to attend the Fashion Institute of Technology and graduate with an associate degree in fashion. In the late 1950’s she was featured on billboards as a Winston Salem model throughout New York subways. She became one of the top young black designers in America featured on a 1960 Jet Magazine cover. She also was featured in Ebony Magazine as a young up and coming teenage black designer touring with Ebony Fashion Fair. Lorraine worked on 5th Avenue in New York city at Maiden Form, Jansen Sportswear, Eileen Sportswear, and later opened her own company Raine’ LTD. In the New York fashion industry Lorraine was viewed as a very talented designer and was highly respected. In her latter life she also worked as a real estate agent with Keller Williams in Indianapolis, Indiana and with United Health Care in Tucson, Arizona as a healthcare insurance specialist. Lorraine also had other talents of being a respected mother and wife. She bore two children with her first husband Ronald Lawrence Hunter (Deceased); Sean David Hunter (Deceased) and Rene Bettis Withers. She remarried and lived in Tucson Arizona. If anyone knew Lorraine, she was a vibrant beautiful person with a smile of gold and a radiant personality. She is that person who viewed life as a glass half full never half empty and was always full of positivity energy and happiness. She loved her family dearly and she engrained the importance of family in her children and all who surrounded her. Lorraine leaves to cherish her memory her loving devoted daughter Rene Bettis Withers and Son-in-Law Anthony Withers; Husband John Black; Step sons Jay Black and Jerrel Black; Grandchildren Jazmine Holiday, Marvin Watford, Jaylen Hunter and Granddaughter-in-Law Dunia Hunter, Miyah Watford, Malik Hunter and Malia Withers; Great granddaughter Amara Watford; Brothers Henry Bettis Jr. and Donald Bettis; Sister Bernice Bettis Dyer; Sisters-in-Law Clementine Bettis and Pamela Steele; Brother-in-Law Barrington Dyer Sr.; Nieces Stephanie Bettis and Danielle Bettis; Nephews Donald Bettis Jr., Barrington Dyer Jr., Wendell Dyer, and Devante Bettis and a host of great nieces and nephews, cousins and friends.

Lorraine Bettis Hunter Black born to the late Henry and Ella Bettis on March 4, 1941, in Brooklyn, New York. She departed this life April 18, 2022, peacefully in the comforts of her home in Tucson, Arizona. Lorraine was born and raised in Brooklyn,... View Obituary & Service Information

The family of Lorraine Hunter Black created this Life Tributes page to make it easy to share your memories.

Send flowers to the Black family.