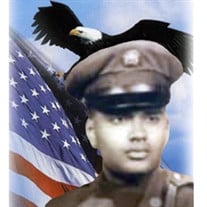 Due to upsurge in COVID-19 cases, please note: Masks and social distancing are required and will be strictly enforced at the viewing, church, and burial FOR ALL ATTENDEES including those who are vaccinated. (Sorry no hugs and kisses). There will be no repast following the burial. Thursday 10am mass will be live-streamed on Zoom. See link below: Topic: Homegoing Service For Sylvan R. de Leon Time: Aug 19, 2021 10:00 AM Eastern Time (US and Canada) Join Zoom Meeting https://us02web.zoom.us/j/83414971820?pwd=U2Z2a20xcmMybkZ6U29NbFQ1SHh5UT09 Meeting ID: 834 1497 1820 Passcode: 736036 Obituary Sylvan Raygan de Leon, Born to Thelma and Raphael de Leon, deceased. Brother to Kelvin Ross, Claudette Peters, and Raphael de Leon. Husband to Antoinette de Leon, Father to Margaret Brinkley, Stefan de Leon, Antoinette Wedderburn, Amin de Leon, Jadasa de Leon, Silvania de Leon, Suhana de Leon-Sanchez, and Tom-Jones de Leon. Grandfather to Antoinette Wedderburn, Amber Wedderburn, Alissa Wedderburn, Amin Joseph, Josiah de Leon, Alister de Leon, Al Baptiste, Jr., Somei Baptiste, Adrena de Leon, Andrew de Leon, Valentina Sanchez, and Michael Sanchez. Great grandfather to Adonis Jean-Pierre. Sylvan Raygan de Leon was born on July 12th, 1948 in Port of Spain, Trinidad. He passed away on August 15, 2021 at the age of 73 after a 12 year battle with Multiple Myeloma. Just as he dealt with all experiences in his life, Sylvan managed his illness with strength and grace. He wanted to spend as much time with his family as possible. On his final days he was home,covered with prayer, and surrounded by his family who he loved more than anything. Sylvan was an extremely bright individual who excelled both academically and in sports. He was a strong athlete who enjoyed running since his youth. A talented orator, it was fitting that he served as an educator in Trinidad before leaving his family behind and migrating to the United States alone in 1969. He was a proud and brave veteran who inspired his own wife, nieces, and grandson to enroll in the military. After serving his country in the United States Army Sylvan went on to study modern languages and film at the City College, City University of New York. He was a masterful linguist who spoke English, Italian, Spanish, French, Creole, Russian, and German. But his best and favorite dialect was the language of Love. He was known for his whimsical sense of humor which led to him often being surrounded by uproarious laughter. He was an adventurous father who was also devoted to his many nieces, nephews, grandchildren, and in-laws. He remained and avid runner into his later years. He will be remembered as a brilliant, kind, loving husband, brother, father, uncle, grandfather, and great-grandfather who would do anything in his power to protect and help his family. His life will be etched in our hearts forever.

Due to upsurge in COVID-19 cases, please note: Masks and social distancing are required and will be strictly enforced at the viewing, church, and burial FOR ALL ATTENDEES including those who are vaccinated. (Sorry no hugs and kisses).... View Obituary & Service Information

The family of Sylvan Raygan de Leon created this Life Tributes page to make it easy to share your memories.

Due to upsurge in COVID-19 cases, please note: