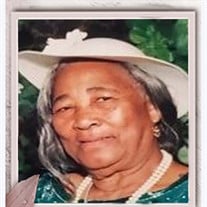 Wilhelmina Beatrice Jeffrey was born on December 11, 1922 to the late John and Hiliriah Joseph in Ebenezer village, Antigua, West Indies. She was one of ten children, six sisters and three brothers. Wilhelmina attended the Jennings Secondary School in Jennings Village. She met the love of her life, Hilton Jeffrey in the early 1940’s and the two were married on August 24, 1950. Together they raised their twelve children. We can all agree that Wilhelmina was the mother of all mothers, the Matriarch of the family! Wilhelmina was an amazing daughter, sister, wife, mother, grandmother, great-grandmother, great-great-grandmother, aunt, godmother, and friend. She was affectionately known as Baby Joe, Bee, Mommy, Mom, Ma, Grandma, Goddie and Miss Jeffrey to those closest to her. She migrated to the United States in 1974 to pave a way for her children’s future. She worked as a Home Health Aide and was able to bring her husband and children to join her in New York. Wilhelmina was a hard worker and after she retired she began a daycare and would take care of several neighborhood children who still call her Grandma Jeffrey to this day. She loved to sew and made her own signature dresses, chair covers, curtains, sheet sets, shower caps and nightgowns. Sundays became a traditional family day for Wilhelmina and her family. She looked forward to those Sundays. After her husband passed and she could not attend church anymore she would get up on Sundays and wait for her family to arrive. We would celebrate birthdays, sing, repeat her Psalms and other bible verses and play games, while creating the most precious memories for her family. Wilhelmina was very competitive and hated to lose. She loved her puzzles which she did every night until the wee hours of the morning. Lots of pictures were taken on those Sundays, and as the family grew, so did her wall of photos until her entire bedroom wall was covered with pictures of family and loved ones. She loved each and every one as if they were her own without discounting her love for her children. She was a true nurturer. Wilhelmina was a very strong woman but as time progressed she was hospitalized due to ailments more times than she liked, however, God always brought her back to us. On July 11, 2019 Wilhelmina was called to sleep in Christ at 1:45 A.M. She was singing and praising God before she closed her eyes in sleep. As we celebrate her life today, let us reflect on the magnitude and the impact that she made on our lives. She was truly the epitome of strength and our hero. WILHELMINA LEAVES TO MOURN: Brother: Wycliffe Joseph Children: Pena, Elyn, Tyrone, Rolston, Sadie, Eugene, Percival, Ursula, Maudette, Cheryl, Sheron, Alfred and Anthea. Grandchildren: Leslie, Michael, Michelle, Leon A. Sr., Leon E. Sr., Esther, Dwayne, Roxanne, Peaches, Andy, Kenny, Nicole, Nicky, Shawn, Ramilla, Kiesha, Rolston Jr., Tylaine, Moniqua, Christopher, Renee, LaMar, Sheniqua, Shaquanda, Jared, Julissa, Keiana, Diamond. Great-Grandchildren: Justine, Tyrell, Kevin, Shannon, Sheniqua, Nikisha, Jahmal, Talanna, Ayanna, Victor Jr., Celine, Latrell, Leon E. Jr., Sydney, Demetrius, Immanuel, Ajahnii, Jahleel, Khailer, Leon A. Jr., Jayden, Raven, Shaniya, Miastar, Devon, Elias, Jasenny, Brianna, Azai, Ryan, Skylar, Kayden, Daylon, Steven Jr., and Hilton. Great-Great-Grandchildren: Aavri, Dominic, Laila, Logan Nieces and Nephews: Elaine, Egen, Lesroy, Peter, Sylvester, Carol, Sharon, Jennifer, Sandra, Murray, Calvin, Alphee In-Laws: Elika Joseph, Sidney Timothy, Kenold Salvant, Melvin Blake, Heather Jeffrey, Mary Jeffrey, Moctar Ali, Tonya Jeffrey, Royelle Jeffrey And many, many other relatives and friends too numerous to mention. *Special people, Luke, Isaiah, and her Goddaughter Loretta Simon. Thanks to her aides Gail, Anica, Valentina, Pam and Dianne

Wilhelmina Beatrice Jeffrey was born on December 11, 1922 to the late John and Hiliriah Joseph in Ebenezer village, Antigua, West Indies. She was one of ten children, six sisters and three brothers. Wilhelmina attended the Jennings Secondary... View Obituary & Service Information

The family of Ms. Wilhelmina Jeffrey created this Life Tributes page to make it easy to share your memories.

Send flowers to the Jeffrey family.