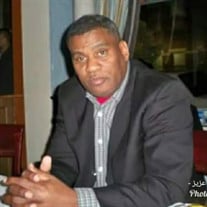 William Wilson, Jr. was born on August 15, 1950, in Harlem, New York to Caroline Gordon and William Wilson, Sr. He was the youngest of nine children. He was preceded in death by sisters; Lillian, Pauline, Gloria, Patricia and brothers; Herbert, Edward and Reginald. He grew up in Brooklyn, New York. William was affectionately known as “Junior” to his coworkers. He was a gentle and jokey soul but would give anybody the business just for the fun of it. He had a generous heart and an infectious smile. He was dependable and consistent. If he could help you, he would. William met and married Marion E. Wynn in 1972, and of that union five children were born. He was a very attentive father to his children, Billy, Michael, Katrina, Adrienne and Cristina. He attended New York City public schools and graduated from John Jay High School. William worked as a laborer for the City University of New York for over 38 years. He was a hard worker. He would leave home at 4:00 am to get to work and find a parking spot; yet did not have to report until 8:00am. He worked at several colleges throughout the city. His last position was with Borough of Manhattan Community College from which he retired. Whenever you needed a hand, William was there. William and his brother Harold had an extremely close relationship. He was fondly and lovingly thought of by all his nieces, nephews, grandnieces and grandnephews. William maintained a close relationship with almost every family member. If he found out their address, he would drive to their home; ring the bell, when you said who is it? His response was…Open The Door! His passion was eating at good restaurants, driving and polishing his car. He also loved to go shopping. He always wanted the best and most expensive. William had a group of great and close friends. Namely...Judy Jones, Vinnie, Carlos, Nate and Rodney. He always spoke highly of each of them. William leaves to cherish his memory…..His children, William Wilson, III (Billy), Michael, Katrina, Adrienne, Christina, 19 grandchildren and 2 great grandchildren, His brother and sister-in-law Harold and Raven Wilson, sister-in-law Leonita Wilson, brother-in-law Douglas Fardan and a host of nieces, nephews, grandnieces, grandnephews, and so many family and friends.

William Wilson, Jr. was born on August 15, 1950, in Harlem, New York to Caroline Gordon and William Wilson, Sr. He was the youngest of nine children. He was preceded in death by sisters; Lillian, Pauline, Gloria, Patricia and brothers; Herbert,... View Obituary & Service Information

The family of Mr. William Wilson created this Life Tributes page to make it easy to share your memories.

Send flowers to the Wilson family.